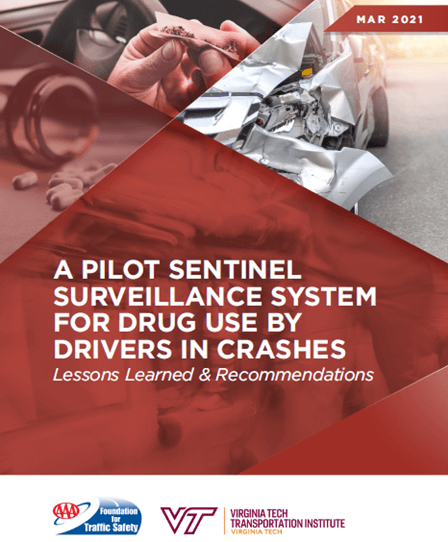 Impaired driving continues to be a significant source of injury, death, and financial burden on society. Alcohol-impaired driving alone accounts for one-third of traffic deaths. However, the prevalence of non-alcohol drug use among drivers remains relatively unknown. Unfortunately, the numerous publicly available traffic databases are notoriously flawed at assessing drugged driving. Common barriers to the collection of high-quality non-alcohol drug data include the necessity of complex drug testing equipment (i.e., there is no breathalyzer equivalent for non-alcohol drugs), the cost of toxicology testing, inconsistent procedures regarding who is tested and what tests are performed, and the emergence of synthetic or designer drugs that can evade detection. Yet, these prevalence data on non-alcohol drugs are critical to understanding the scope of drug-involved driving, developing effective countermeasures, and monitoring changing trends in drug usage and driving.

In collaboration with the AAA Foundation for Traffic Safety, VTTI developed and implemented a pilot sentinel surveillance system at two Level I trauma centers: one in Roanoke, VA, and the other in Winston-Salem, NC. Blood specimens and associated information (e.g., age, sex) were collected from drivers injured in motor vehicle or motorcycle crashes upon arrival at the hospital. Data were de-identified then sent for comprehensive toxicology testing for alcohol and a broad range of over-the-counter, prescription, and illicit drugs. These data formed the basis of the sentinel surveillance system. A centralized data repository to store the de-identified data was created and standards were developed for data collection to ensure identical information was collected and stored.

Additionally, a guidebook was created on how to implement a sentinel surveillance system for drug use by drivers in crashes. The four phases of developing and implementing a sentinel surveillance system (i.e., preparation, data collection, data storage, and data analysis) are broken down into smaller steps and each chapter uses examples and lessons learned during the pilot implementation to illustrate the process from start to finish.